Business cases identified or set up:

The Baviaanskloof-Langkloof landscape is home to an incredible diversity of vegetation, stemming from its unique combination of elevation, geology and soils. Hundreds of its species are found nowhere else on the planet. The Baviaanskloof River, Krom River and Kouga River, which run through the landscape, feed into the water supply of the 1.3 million people living in the city of Gqeberha (formerly known as Port Elizabeth).

Local communities face the same social, economic and political challenges as present throughout South Africa. Landscape degradation has led to loss of ground cover and vegetation, soil erosion, invasion of alien plant species, loss of soil health and disruption of the water system. In addition, the region has suffered from drought since 2015.

Work in the Baviaanskloof-Langkloof landscape has been underway since 2009. Since this time, the team on the ground has worked diligently to build trust with stakeholders and understand local context. Through the work of our partners, degraded land is currently in the process of being rehabilitated and regenerated through regenerative agricultural practices.

The partnership has also led to the establishment of three regenerative companies, with the aim to provide income streams while restoring the land:

The critical theme for the year was the country-wide drought, with the Eastern Cape in a state of emergency. Nevertheless, rehabilitation work of 1685 hectares of degraded lands continued in the Baviaanskloof. The Baviaanskloof Bewarea conservancy team worked on restoring 308 hectares with ponding, seeding and brush packing (using organic material to protect the newly growing vegetation in the ponds). Before summer, some showers passed through the Baviaanskloof and water sunk into the ponds and produced a green flash across the landscape. The story of the reseeding was covered by the Port Elizabeth Herald.

In part because of the restoration work mentioned above, the regenerative agriculture pasture planted in Sewefontein in 2020 is surviving the drought and providing much needed sustenance to goats during the kidding season.

The Baviaanskloof Landscape office has been built and set up at the DevCo distillery, bringing together the Bewarea Head Office and base camp, distillery and Living Lands laboratory. A Research and Development trial plot was set up next to the Distillery – one of three planned R&D plots to trial the production of different oil herb species.

LKHBCo won the Tea Tycoons Program award in the Green/Sustainability category. In doing so, it won a booth at the World Tea Conference and Expo 2021 attracting a flurry of international interest. Meanwhile, LKHBCo received organic certification for the EU. The market for honeybush tea remained challenging, and in order to position the tea well, LKHBCo has been focusing on reorganising the supply chain to ensure the highest quality tea. Twelve distinctive flavoured honeybush tea blends and pyramid tea bags have now been developed to target the premium market. Meanwhile, trials of regenerative production of honeybush tea expanded. At the close of the year, LKHBCo managed to secure a second round of seed funding from a South African Oppenheimer Generation Foundation.

Both LKHBCo and Living Lands embarked in 2021 on the process of developing a new 5-year strategy for consolidating the work up until now and aiming to expand the impact further. 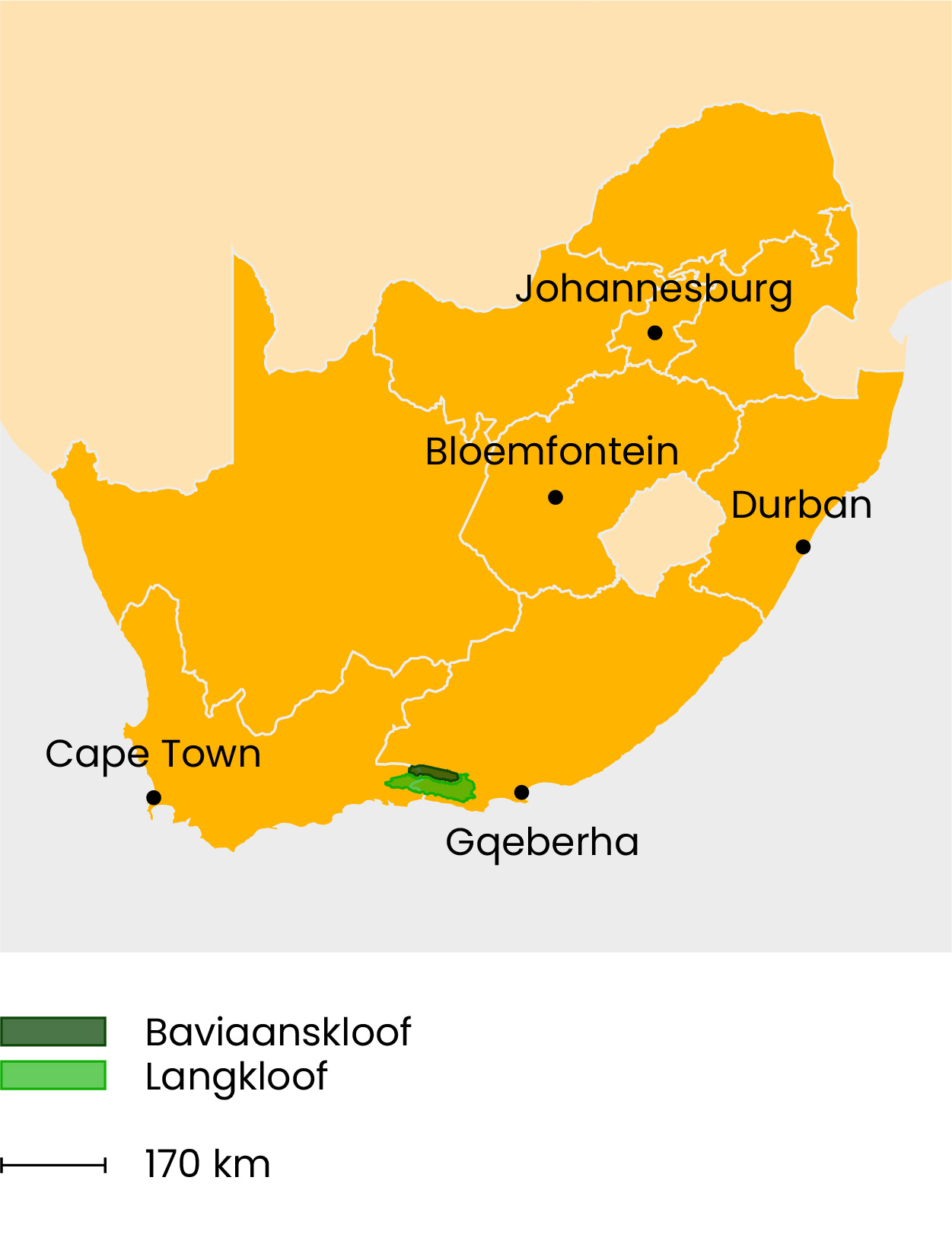 It may seem counterintuitive, but in the Langkloof an important part of the rehabilitation work is to remove trees from the landscape rather than plant them. In this landscape, plant species from other continents have been introduced some time in the 19th or 20th centuries and have spread across the landscape. Species such as eucalypts, black wattle, and pine species have taken hold in the fynbos ecosystem, dominating and outcompeting native species. Because they are fast-growing, their high water use dries out the land, causing further ecosystem damage.

Alien invasive clearing is extremely labour intensive and requires understanding of the local ecosystem. The thickest patches are often hard to reach by vehicle. Often, alien plants are cleared by chopping them by hand or chainsaw and applying herbicide, or by a controlled burn. Other ways of dealing with the aliens can be with bio-control – ie by introducing targeted diseases or fungi – or by intensive grazers such as goats.

Having a locally-applicable farm management plan and updating it over time is very important. Furthermore, after the initial clearing you need to come back to remove all the new alien trees that germinate, and you need to keep doing this in the years that follow. As alien invasive species are cleared, indigenous vegetation is slowly coming back.